Hey there! We’d recently updated the WooCommerce iOS app to version 1.1.1, which fixed an irritating bug with phone number formatting. However, we’d noted that we had another patch coming in that post:

We’ve also got a version 1.1.2 patch about to be submitted (remember, it takes about a week for Apple to review) that has a workaround for server incompatibilities with some hosts. If you’ve updated your API keys, but you can’t update order statuses from the app, chances are that this has affected you.

We needed to test this patch out a bit, so we’d submitted what was already fixed up, then pushed this fix out just afterwards. It’s now live on the app store, and provides a workaround for shops that experienced issues while trying to update order statuses.

We were finally able to narrow this down to an incompatibility with some server environments, so thanks so much to all of you that were patient and helps us out in finding this issue in support tickets! We know it’s really frustrating when something doesn’t work as expected; it can be a bit difficult to make sure we’ve hit all the edge cases when we push a new version, but unfortunately that’s part of the nature of this app is since it’s running on your own servers (of which there are thousands of configurations) rather than in a controlled environment.

Remember, you can shoot us an email or leave feedback right from the app if you snare any more bugs for us! You can access it from the main app menu: 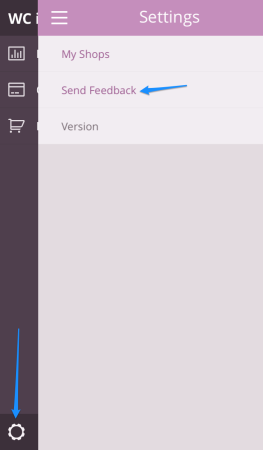 Thanks again to our customers that helped us narrow down this issue via support tickets! You’re the best 🙂 .